Working at the Willow Theatre (by Richard Dowson)

Many of us male Willowdale types had the joy and pleasure of working at the Willow Theatre for Mister Allen, a very nice man. Mr. Allen was Jewish and had changed his name to “Allen” to avoid any discrimination in the community. In a stroke of irony, the old ‘Capitol Theatre’ in Moose Jaw was also run by a Mister Allen and his name still appears in plaster on the ceiling art work. My assumption is that ‘Allen’ was a common ‘conversion’ name with Jewish people in the movie business years ago.

If Mister Allen has a short-coming it was paranoia. He seemed always worried someone would damage his beautiful 1954 black Oldsmobile, or that Ushers would open the side doors and let people in for free. He parked his car close to the front of the theatre on the north side and was always out watching the side doors on Saturdays when there were lots of kids at the movies. When the movies were over on Saturdays kids ‘exploded’ out the side doors and Mister Allen would go nuts trying to stop them. There were no ‘shows’ on Sunday. There was nothing to do on Sunday, in those days, except go ‘back to the Don.’

When I worked there over the winter of 1955-56 it cost fifteen cents to get in to a Saturday matinee. Since a cup of coffee at the Northway Restaurant was ten cents, the admission to the ‘show’ was pretty cheap. (ASIDE – here in Saskatchewan people still go to ‘the show’. In Alberta, as long as I can remember, people there go to a ‘movie’.)

I was paid forty cents ($0.40) an hour and considered myself fortunate. I got to work about fifteen hours a week which included all day Saturday and some evenings. My previous job had been a ‘bag-boy’ at the Dominion Store up at Northgate Plaza. It was a good job and I enjoyed it. Before working at the Dominion grocery store I delivered the Globe and Mail where I made eight cents a paper. Delivering the Globe was an old family tradition.

I delivered the Globe from Yonge Street back to Bayview on Parkview and Kingsdale. The paper route was in the family from the time my brother John Dowson stated it. I took over after my sister Mary quit the route. I sold it to someone. I had the route up to 97 papers that included several houses back in the “bush” – at the top end of Norton and McKee Avenues. When I increased the number of customers I won a Timex wrist watch; my first watch. The watch was waterproof but died when I got the stem caught on a lily-pad up in Muskoka, popped the stem and water seeped in killing the time-piece. 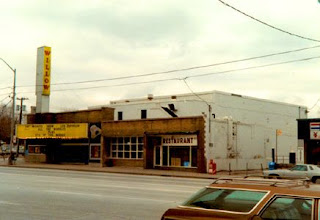 The Willow Theatre was on the south-east corner of Yonge Street and Norton Avenue, just across from Stevenson’s Shell Gas Station. It was a great location. Immediately behind the Willow was a parking lot; then the access road into the Township shop and then the Ryan’s house – home to George, Nora, Jimmy and Johnny Ryan and their parents. George died in late March 2009 and Nora was killed in an auto accident many years ago. Some will remember her, she was married to Jimmy McCarthy.

The movies at the Willow Theatre in those days were almost all double features. There were many musicals which no one liked. The only time I can remember when there wasn’t a double feature was when the King and I played. The reason for that was the movie was too long. I got to work ‘The King and I’ and saw it thirteen times. 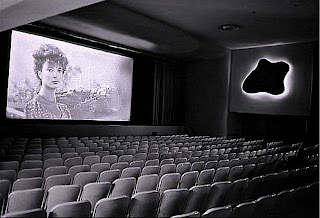 The Saturday Matinees were pure bedlam. The place filled to over-flowing with kids paying fifteen cents to see a double feature, and usually not knowing what was playing. Kids never cared about what was playing. Going to the Show on Saturday was what it was all about. And once there, if the movie was boring you could screw around and chase girls or bothered others. There were never adults at the Saturday Matinees. Never!

Popcorn was sold in small cardboard boxes. Fun was pushing in the end, making the box flat and then throwing it like a Frisbee at the screen. This drove Mister Allen crazy! In addition to that kids put their feet on the seat in front and pushed, shaking whoever was in the seat; causing a fight at the most or damaging the seat at the least. This also drove Mister Allen crazy!

Teenagers and older guys loved to come to the show with a girl friend so they could neck in the back row. When I was the usher the guys who sat in the back three rows were all bigger than me. They didn’t cause trouble – they were too busy looking after the girls they came with. I stayed away from them. The back three rows were where it all happened – where the ‘Fonzes’ of the day sat.

If the people in the back row contributed anything to the show it was their comments. One time when the “Revenge of the Crab Monster” was playing some guy stood up and shouted, “Those crabs aren’t big! You want big crabs! You should see mine!”  Mr. Allen demanded to know who shouted but he got no help from me.

As an usher I had to wear dress pants. I bought two pair of custom ‘strides’ from Jack Fraser who had a store on the west side of Yonge Street just below the city limits. My favorite pair was dark blue with a dropped waist, tunnel loops; cuffs pegged at sixteen inches and the knee ballooned at twenty six inches. And when you went to see Jack he treated you like a king. And his prices were right at just sixteen dollars for a pair of strides

Being an usher was a ticket to meet girls. That part of the job was worth all the down sides. As was typical then, as now, is that the girls you didn’t go to school with were the ones you found the most charming. My favorite group were the girls from the catholic school on Shepherd and Bayview. (St. Gabriels.) They were fun and I met the charming and gorgeous Lynda Hurst from that group and we dated for some time. I actually spoke to her in 1974 when I was in Toronto on a visit. We went out many times and I went to CYO dances at her church. Her dad and brother worked in Toronto for the railroad and they lived on Empress back near Bayview. When we went out it was to the show – but not the Willow. We’d go to the Bedford just south of the City Limits.

One important job of a Willow Theatre Usher was to raise and lower the screen “legs”. The legs were heavy flat black cloth strips that hung down on both sides of the front of the projection screen. They were left down for normal narrow movies and had to be raised up and dropped onto the catwalk on the back of the screen when the movie was cinema scope. If they weren’t in place the movie did not show well.

To get to the legs the usher – usually me, would have to climb to the top of the screen at he back and haul them up. It was difficult and somewhat dangerous climbing up the back of the movie screen on the small scaffolding but hey – it was show business.

Other jobs as an usher included changing the marquee, and carrying the big steel cans of film down to the front of the Willow and taking new ones up stairs. I was never allowed into the projection booth. Not sure if anyone was.

A major event while I worked at the Willow was meeting Wally Koster. Wally lived on Elerslie and was the co-star on the CBC TV show Cross Canada Hit Parade. The show featured songs from the hit parade that Wally sang along with Joyce Hahn. We were thunder struck when he came to the Willow. (It was a week day evening – not a Saturday matinee.)

If you didn’t go to the Willow you rode the bus down to the City Limits Bus Station – where the Mt. Pleasant trolley bus terminated at the loop –  and went to the Bedford just south of the ‘Limits’ or walked over to Avenue Road and went to the Glendale.

There was entertainment in Willowdale before television – it was called ‘going to the show at the Willow. And can you imagine sitting through a double feature today?

We welcome your comments

How to add comments